Memories of The Troubadour

It’s some sad days here in Brisbane at present, as one of our best loved music venues, The Troubadour, closed its doors for the last time on Sunday night. Live music venues everywhere are under the pump… pokies have encroached on their space, noise restrictions have proved hobbling and the continually rising price of the real estate they occupy is making it difficult to keep the doors open.

Brisbane is infamous for losing venues… Cloudland, Festival Hall, The Alley Bar to name just a few and frankly we just couldn’t afford to lose another one! And as I write this there is word that The Globe Theatre is also looking down the barrel of closing. The only way to stop the bleeding is to get out and see some live music (or poetry for that matter). I know I am dusting off  my dancing shoes over the next couple of weeks and am heading out to see:

The Lemonheads @ The Zoo, November 30

Am super excited about all shows!

I have also been reminiscing about my favourite moments at The Troubadour and while I can’t narrow it down to one show, these are some of the shows I will have lasting memories of:

Vic Chesnutt – Well, I am forever thankful I got to see the man play… he was assisted onto the stage in his wheelchair, his frame, ghostly thin, but when he opened his mouth, there was a force in his voice, and a sharpness of wit, that hit me in the gut and held me transfixed. His version of Sponge that night is still reverberating somewhere inside me.

The Fauves – They were launching When Good Times Go Good and man, did they go good that night! Coxy was at his ascerbic best and the band were hotter than minimum chips! Fight Me I’m Forty stirred everyone in the crowd from their spot on the floor or their comfy cushion (how I will miss the comfort of that venue).

Lou Barlow – Had just seen Dinosaur Jr a couple of days earlier and the ears were still ringing, so Lou’s lo-fi folk masterpieces were just the tonic I needed. He was in fine form too, bantering with the crowd and playing every song from his then recently released EMOH as well as a stack of Sebadoh, Folk Implosion and Sentridoh tracks. In fact, he played such an exhaustive set, people were calling out for Lou to play some of Jason’s (Lowenstein) songs as well.

And I couldn’t complete this post without mentioning The Gin Club who I saw there many times and who fittingly took the stage for the last time on Sunday night. They made the place their home away from home and never failed to put a smile on the punter’s faces.

So what are your memories of The Troubadour? Let’s keep them alive…

Brisbane folk/rock beast The Gin Club are taking over the finest live music lounge in town, The Troubadour for three consecutive nights to launch album no. 4, Deathwish. Tonight’s debut launch is a sell out and this Lost Shark is happy to say he will be there, enjoying a Tanqueray or three, singing loudly and generally having a good ol’ time.

There are still a handful of tickets left for the Saturday and Sunday night shows, so if you are in the hunt for some live music this weekend… check out The Troubadour website for all the details.

And if you can’t make it along… here’s two videos from Deathwish to warm your lungs and get your feet tapping.

The World is a Sponge… a night with Vic Chestnutt 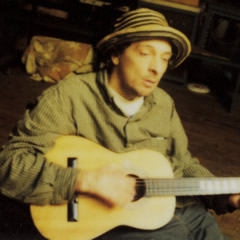 Last night I had the extreme pleasure of witnessing American underground legend, Vic Chestnutt playing his sparse blend of warts & all folk rock at The Troubadour. From the get go, this was always going to be something special… Vic touting that he was going to take us through his back catalogue, playing a song from each album, opening with Mr Reilly off his 1990 debut Little. With only his battered acoustic and voice, the poetry of his lyrics cut straight through…

well there’s a Mr. Reilly who swears
that in Baton Rouge Louisiana,
they don’t care about, his philosophy
he swears that any time in Baton Rouge
everything is the same

Then it was on to 1991’s West of Rome and the song Sponge with Chestnutt howling,

and when the crisis passes
when the coast is clear
I’ll be buffed down to a liquid
and the world, world, world it is a sponge

We were also treated to Supernatural (from 1993’s, Drunk), Gravity of the Situation (from 1995’s Is the Actor Happy?) and closer, Florida (West of Rome), with Vic aptly joking, that over here, you could change Florida to Gold Coast and have it ring true.

I bantered with Vic to have him play Vesuvius, but hey, you can’t have everything. If you have never had the pleasure check out these lyrics…

Trying to clip the creek to the bank with a clothes pin
Waterlogged system, rusty spring, faulty planning
Logic squeezed out like mustard at a corndog
Hypertension is not wisdom, chewing the leather straps
Trying to hold the sun still with a bobby pin
Burned fingers. excellent conductor of heat
Private fantasies are not public policy
Christian charity is a doily over my death boner
Busy work is not the Great Wall of China
Vanity bamboo hut out back behind the big house
Pretend is salve for whitey-boy guilt
Furiously slapping at the moon with a cane pole
Trying to prop up the heavens with a fresh flat pencil
Some folks are allergic to rubber
I am trying to stitch this one to all the rest of them
But the seams will split, collide and cleave
Neopolitan ice cream is never truly integrated until it’s too late
Trying to stop the bleeding with scotch tape
Platelets spoil adhesion, fire up the cauterizing iron
It’s a branding of necessity not scarification
Bliss was a pimple that I tried to pop
It erupted up and out on my countenance
Ugly eruption, Vesuvius, ugly eruption, Vesuvius
Ugly eruption, Vesuvius
Vesuvius at myself, Vesuvius at myself

For all those who saw the show (and there were not enough of them…), I am sure they are like me, smiling, dusting off the records and singing duets with Vic, loud enough for the neighbour’s to hear.

And for those who don’t have any records to sing along with, check out these four clips detailing the making of his classic 2005 album, Ghetto Bells… great stuff.

For the love of lyrics – Jamie Hutchings & Vic Chestnutt

For those with a love of great lyrics, there are some incredibly talented artists coming to Brisbane in the next few months. Two acts particularly have got this Lost Shark in a frenzy. 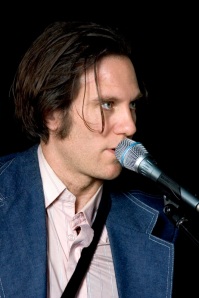 First up on Thursday July 11 is Jamie Hutchings and His Imaginary Choir at The Troubadour . Jamie Hutchings is the softly-spoken, thoughtful son of a jazz musician, bitten by the bug of rock ‘n’ roll. His life-long passion is and always has been music, the creation of music, the joy and pain of it all. And like so many great Australian artists he has never truly received the attention he so richly deserves. The songs on His Imaginary Choir are a departure from the angular, more aggressive material he is best known for, fronting indie-noise pioneers Bluebottle Kiss. This time around he is in acoustic mode, creating a record that has a pastoral, summery feel, tinged with 1960’s exotica. Lyrically, Hutchings is ahead of the pack. Take these lyrics from Slow Train to a Comfy Jail (from Come Across) for example:

and only heaven could taste as good as this
but there’s no room for our fractured fists
scrawled my name on the wall with a piece of rusty wire
and felt the night extinguish me with its cool cool fire
I spent seven years without my good wife
til I found her laundering incarcerated bed clothes
found her eyes had to censor a smile
and had to go the gods would know
and I don’t know how cold it gets
do you wanna come home?

Yes, this is a show, as anyone who caught him at Queensland Poetry Festival in 2007 would attest to, is one not to be missed.

Here’s a link to the clip for After the Flood, the lead single from the new album.

And for a bit of fun, here is a link to a poetry game on the Bluebottle Kiss site: 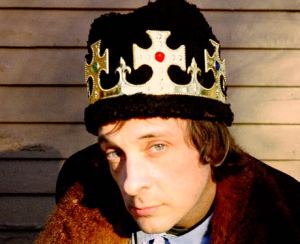 Then when July rolls around, American folk-rock innovator Vic Chestnutt hits town with Victoria Williams. Since the late 80’s Chestnutt has been perfecting his curiously aching stream of consciousness lullabies. He sums up his uncompromising lyrical style perfectly when he says, Other people write about the bling and the booty. I write about the pus and the gnats. To me, that’s beautiful. Like Hutchings, Chestnutt is one of those artists who while never breaking into mainstream consciousness has earned the deep respect of his musical peers. He has recorded with artists as diverse as A Silver Mt. Zion, Michael Stipe (REM), Lambchop and Van Dyke Parks and had his songs covered by everyone from Madonna to the Smashing Pumpkins. Simply put, he is an extraordinary talent and this is his first ever Australian tour, so make sure you catch the magic when he plays the Troubadour on Saturday July 11.

Here’s a link to Chestnutt playing live with members of Godspeed! You Black Emperor, A Silver Mt Zion and Fugazi.