It’s Australia Day… not a day I celebrate for too many reasons to go into (here’s three links 1, 2, 3 that explore some of the reasons). Something I am passionate about though is Australian Music, so today, I thought I would preview four albums that I am anticipating will be on high rotation at Lost Shark HQ in 2013. I hope they add some fire to your Saturday morning!

Cave has been lapping up the literary stardom of late, so it’s great to see him return with the first Bad Seeds album since 2008. We Know Who U R is the first single from the album.

Steve Kilbey – African Jesus from the new album The Idyllist

While there has been much talk about Steve leaving The Church of late, news of a new album is always welcome. Here’s the first cut from his new long player, The Idyllist.

Night Terrors are a new discovery for me, but their twisted take on the post-rock genre has been rattling round my brain in the most joyous way! And this clip is bound to make you smile.

It’s been a long time between drinks for The Drones (five years in fact), so roll out the red for one of Australia’s finest ever rock bands. I couldn’t find a clip for this, but the pic below will lead you to the preview of the song How To See Through Fog. 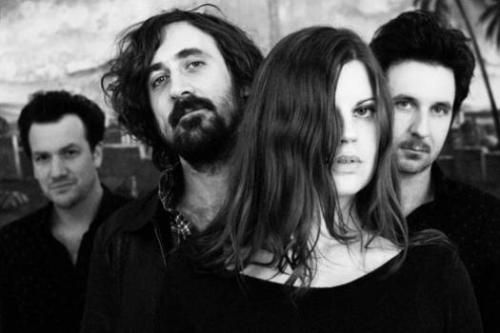 Filed under discussions, who listens to the radio?

How to brighten your Saturday

Well, where I am sitting the sky is steel grey and has been for days… the trees are heavy with last night’s rain and there is no sign of the sun poking its head through (apparently until Wednesday).

So I have been brightening my Saturday with these three gems:

Yep, you read that right… Burroughs talks to legendary Led Zep guitarist after going to see the band back in June 1975.

Burroughs is blown away by Zeppelin, fascinated by their use of repetition, volume and drums, elements common to Moroccan trance music, a real passion of Burroughs’.

They discuss mantras, infra-sound and death ray machines… this is most definitely a rock interview, Burroughs style.

Liddiard has been turning heads and blowing ear drums as front man for The Drones for more than a decade but this week he dropped his first solo album, which is a predominantly acoustic affair. As a lyricist, Liddiard is up there with the best in this (or any other) country, so for me it is a real treat to have them right up front on the new album. And while it may be an acoustic album, none of the intensity of The Drones is lost. Just check out the title track, Strange Tourist.

I have become quite taken with this poem recently, needing to read it several times a week… the stove, the diaries, the bird in the flue. The imagery in this poem marries power and beauty to deliver a revelatory ending.

You listen to Jacob Polley read the poem here.

A bright Saturday to you all…

Filed under interviews/artist profiles, poetry & publishing, who listens to the radio?

Well to tell the truth, these folk have been putting out great music for the last decade or so (in Lloyd’s case the last three and a bit). But not one of these artists is trading on nostalgia and for me that is one of the things that is crucial to longevity. So here’s my soundtrack to this perfect Saturday morning… Sparklehorse, Lloyd Cole & Gareth Liddiard (The Drones), I hope it helps brighten yours.

This is from the first Sparklehorse album, vivadixiesubmarinetransmissionplot. Sparklehorse mainman, Mark Linkous has been described as defiantly surreal. And like the surrealist shapeshifter, his work has defied genre and boundary. Most recently, Linkous teamed up with renowned DJ, Dangermouse and dark master of film, David Lynch for the Dark Night of the Soul project. Just love the warmth of this song…

Most people hear the name Lloyd Cole and expect to hear and the Commotions in the same breath, but the truth is, Lloyd has released a string of brilliant solo albums since the Commotions days ended in the late 80’s. This song is taken from the ridiculously underrated 2003 album, Music in a Foreign Language. And it provides a great taste of things to come, as Lloyd makes his way to Australia in November for a show at The Powerhouse on November 7. I have my ticket… what about you?

Known more for their cathartic blues rave ups, this stripped back version of Shark Fin Blues from the sublimely titled 2005 album, Wait Long By The River And The Bodies Of Your Enemies Will Float By, highlights the beautiful menace of this song… They’re coming fin by fin until the whole boat sinks. Beautiful stuff!

Some images may offend, others may mend – A Night With Kev Carmody

Last night, sitting on the grass, one among the thousands who had gathered, the winter sky revealing its stars, my eyes and heart welled up. We gathered, as people have done on this land for millenia, to celebrate the power of the word. In the not too distant (and very bleak) past, this would have been considered an illegal gathering, but last night, we sat in harmony, celebrating the songs and stories of one of our finest singer/songwriter/poets, Kev Carmody.

The list of artists who took to the stage to breathe new life into these songs, was a veritable who’s who of Australian rock. There were many highlights…

Tex Perkins stripping back, the bluntly beautiful Darkside (from the album Bloodlines), performing it as a menacing spoken word piece.

Glenn Richards (Augie March), Missy Higgins & Paul Kelly’s version of Droving Woman (from the album Eulogy). With Kelly delivering lines like, some dogs grow too old for change, it seemed the song was written for him.

The visceral rock of The Drones took River of Tears (from the album Eulogy) to a whole new place; Gareth Liddiard wailing, two hundred years in the river of fear / they gunned him down. You could see on Kev’s face when he walked out on stage after it, that he was blown away by the power they mustered.

Steve Kilbey’s version of Images of London (from the album Images and Illusions) was exquisite. Kev recorded this song in Steve’s old Rozelle studio in 1995, so it was great to hear Steve put his stamp on it. Here’s a great link to Steve talking about and perfoming the song.

And if there was one defining moment, it was Kev himself taking centre stage to perform Cannot Buy My Soul.

As the last notes of From Little Things, Big Things Grow drifted off into the night sky, we stood as one, brought together by stories. Stories that will remain with me for as long as I draw breath.