The candles are blown…

and the smoke has risen.

SpeedPoets went off with a bang yesterday, celebrating 10 amazing years! Here’s a few snaps from the gig.

As always, Sheish Money opened the day with a song. Sheish has been part of the SpeedPoets family for 8 years and I just can’t imagine the gig without his distinct sound. Baron Field and I also had the pleasure of joining Sheish on stage for the opening track, Baron picking some mean banjo and me reading Max Ryan’s poem, Jim.

After a couple more songs from Sheish, I joined him on stage again to kick off the first open mic session of the day, reading the poem, Blood, from the man who coined the name SpeedPoets, Fakie Wilde. 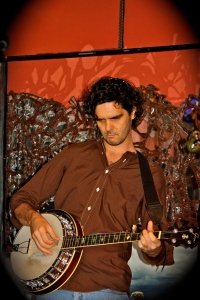 Brisbane troubadour, Baron Field was next up, playing a set of songs from his recently released self-titled, debut album. The room was hoppin’ as Baron was joined again on stage by Kieran Waters (banjo) & Sheish Money (slide guitar), the trio, ripping through a red-hot set featuring the tracks Writing Lines, Fallen Lighters and Month of Sundays. You can listen to all of these tracks at Baron’s bandcamp site. Well worth checking out!

Add to that the 32 Open Mic readers who each performed a poem, a closing song from Sheish and Baron and I am sure you can picture the large crowd, filtering out into the dimming light of evening, buzzing with conversation, already hungry for next month’s event.

Roll on April I say!

I will be posting more pics over at the SpeedPoets site during the week so make sure you drop by.

And finally, big thanks to Cindy Keong for all of the photos!

I had a chat with Brisbane country-blues troubadour Baron Field last week in the lead up to the release of his debut album and his feature at this Sunday’s (March 6) SpeedPoets 10th Birthday Gig. We talk about the albums that keep pulling us in, the writing process, how Ipswich is a fine fish & chip town, great places to check out live music in Brisbane and the curse of flat-footedness. There is also a link to Baron’s bandcamp site where you can listen to a number of tracks off the album. If you like a poetic lyric, are not adverse to finely picked guitar (or even a banjo), enjoy all the smoothness of a gravel-cured voice, then this man just may be your new favourite singer-songwriter.  You can read the full interview here.

This week is a big one…

Tonight’s gig at Riverbend Books is almost sold out (a few tickets left so get there early!!!), tomorrow nights gig at Confit Bistro is being filmed for Channel 7’s The Great Southeast and then on Friday night I fly down to Melbourne to feature at The Castlemaine Poetry Reading (at The Guildford Hotel), hosted by Ross Donlon on Sunday, Feb 27.

And to add to that excitement, I am counting down the days until SpeedPoets celebrates its 10th birthday on Sunday March 6 at InSpire Gallery Bar (71 Vulture St. West End). SpeedPoets has kicked off the year by revamping their website and the first person to step on to the virtual stage is one of the 10th birthday features, our lovely lady from 4ZzZ’s Waxing Lyrical, Fern Thompsett. Head on over and check out our interview and read her poem Sunset on the Back Steps.