Day #3 of QLD Writers Week and it’s time to leave the seed and grit of Fortitude Valley, to explore the lands of disPLACEment. Samuel Wagan Watson speaks about losing and finding his way and how his words have landed on places as far away as an International Space Station. 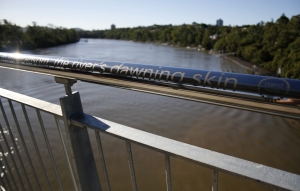 “PLACE” has always interested me.  I come from an ancestry of slaves who often survived or existed in a state of limbo, working in servitude on their own country.  For many generations, my peoples’ existence was administered by a colonial regime that just randomly ‘moved’ individuals and families who didn’t assimilate as easily as others…

…it broke my heart to see my people carrying bibles under their wing…with no disrespect for the Bible…because the only book that we had ever known about and ever been told about was the Bible.  Nobody had ever bothered to introduce them to any other book…

This is a quote from the late celebrated Indigenous poet Kath Walker Oodgeroo Noonuccal.  Her special place was Stradbroke Island, Quandamooka; the land of her ancestry.  She was my Aunty through marriage, because many of my tribe were moved to this island to try to isolate them from their connection to our “PLACE”.

This quote from Aunty Oodgeroo can easily be interpreted by anyone who has ever been lost in someone else’s words; that passage in a book or piece of text that carries a reader away.  And many of my people have been lost and found within the Bible.

I’m reminded by “PLACE” every moment as I journey between the waking and dreaming posts of my life.  And upon this journey I’ve lost my way…so many times.  This country we live on is an open book that is edited every day. It has its original authors, ghost-writers, counterfeiters and factotums.  And every moment we all battle for a place and individual mark within these pages.

Until I learnt how to write, I lived an existence of social limbo.  When my writing abilities were acknowledged by my teachers and peers in school, I suddenly found my journey in life.  Therefore, I was no longer, out of place…

The capturing words
Of a death threat or love note,
Flowers upon bloom…

To be a writer is to be a textual architect of worlds that can be both serene and insidious, but the ability to create these places is the gift of creativity.  And anyone who has existed in limbo would understand what it’s like to get lost in a good book or to be able to construct a means of escape.

My current post is with 98.9FM Murri Country as the Principal Writer.  I spend my days developing community announcements that run between 2-3 minutes on air covering a range of social subjects for a predominantly indigenous audience.  The job isn’t unlike the alchemy of constructing poetry and I rely on the creative writing skills that I’ve developed to reach certain ‘places’ that are extremely disadvantaged and problematic. And every now and then my writing opens a window on ‘places’ that are wild and majestic.  That I come from a culture without a written language is extremely advantageous in my job, and showcasing ‘place’ in a 30-40 second timeslot is just one of the technical  aspects of my position, whether I’m recreating a scene on the streets of West End to the white sands of a Cape York beach.

There are similar design elements to my preferred mechanism of constructing haibun or prose poetry, except my block of prose ends with a ‘sweeper’, or an ‘outro’ or funding acknowledgments and even disclaimers….the information in this message was correct and accurate of the time of broadcast, blah, blah, blah…

The most ‘challenging place’ my writing has led me to were the commissions for television, like “Bush Slam” and “Sunday Arts” – there’s just something about the medium of television that turns me into a blabbering, dyslexic anomaly?

The most ‘interesting place’ my writing has landed upon is the International Space Station through some of my haiku that were commissioned by the Japanese Aeronautical Exploration Agency. (JAXA have their own residential Haiku Professor!)

The ‘oddest places’ my writing has toured is within the misinterpretations of foreign audiences.  A piece of my work features a ‘Nylex’ hose in the backyard in a typical Brisbane summer; we used to play a game called ‘Poison Snake!’  My German audience had all heard of Australian legend ‘Steve Irwin’, but not of the concept of a ‘Nylex’ hose fight….so they literally cringed at the visions of kids spraying each other with snake venom!

The ‘darkest place’ my writing has ever taken me was when the Newcastle Regional Art Gallery commissioned me to write a poem about Charles Blackman’s painting ‘The Student’ – based on a missing schoolgirl.  It’s the first commission that I couldn’t complete because the theme became so sinister.  I ended up working on another canvas by an emerging artist and completing a wonderful poem that I was proud of.  But it was also the first time that I created a ‘place’ in my journals that seemed to be truly evil with my exploration of Blackman’s dark imagery.

From my balcony I can read a strong poem that the moon
has pasted on the river.  Everything is quiet.  Now and
then, a wave breaks the message, temporarily changing
the font from bold to italics.  The moon in its crescent
appearance is the precision blade of a Shaolin warrior.
I’m concerned that if I gaze too long, I may carelessly jag
my retinas on its razor points, pierced globes adding
vitreous humor to this serious stretch of river.  A mullet
leaps from the water and reconstructs the moons
message; it is now the sound of one silver hand clapping.
Above, an anonymous comet breaches the sky a small
eternity, but shooting stars don’t have the recoil of a poem
executed in the lull of moon fire.

Born in Brisbane in 1972, Samuel Wagan Watson is of Munanjali, Birri Gubba, German, Dutch and Irish descent. He spent much of his childhood on the Sunshine Coast before returning to Brisbane to start a career. He was the winner of the 1999 David Unaipon award for emerging Indigenous writers with his first collection of poetry, Of Muse, Meandering and Midnight. Since then he has written four more collections; Itinerant Blues (2001), Hotel Bone (2001), Smoke Encrypted Whispers (2004), which won the 2005 New South Wales Premier’s Book of the Year and the Kenneth Slessor Poetry Prize, and The Curse Words (2011).

The Back Room keeps the QPF buzz going when it lights up Confit Bistro (4/9 Doggett Street, Fortitude Valley) tomorrow night (Wednesday August 31). This is an event not-to-be-missed as it will feature the launch of two sparkling new poetry collections, The Curse Words by Samuel Wagan Watson and Career by Liam Ferney.

The Curse Words is the second chapbook from award winning poet, Samuel Wagan Watson for Vagabond Press; a mixture of prose-poems and textual blues-riffs. The Curse Words frames some of Samuel’s ‘muses’ and abuses of verse. This chapbook inspired a well-received show at the recent Adelaide Cabaret Festival by award-winning chanteuse, Leah Flanagan and will premier at the 2012 Sydney Festival.

Career is the second collection from Brisbane poet, Liam Ferney. It is the story of an English teacher marooned in the outer suburbs of Seoul during the 2002 world cup. It is a tale of typhoons, late night bars, cab rides and thwarted love. It is Liam Ferney’s second collection and follows on from 2004’s Popular Mechanics. Poet Gig Ryan describes Career as “bejewelled with the insistent shouts of everyday life… All laid out in poems tailor-made for aficionados of Korean alcohol and cigarettes, Italian zombie movies, acronyms and abbreviations of all kids.”

Both collections will be launched by acclaimed Brisbane poet, Brett Dionysius.

Sheish Money & I will also be on deck to fire things up, so get your poetry shoes shined… doors open at 6pm with the live action staring at 6:30pm.