SpeedPoets has come and gone again for the month and as always there were many highlights.

The melodic chaos of Bremen Town Musician filled the room as she tore through a fiery set of songs from her latest album ‘No One Is Holding A Gun To Your Head – Songs to Run to’ and her spoken word set was also something to behold as she writhed, whispered and chanted the poems from her collection ‘Fire in the Head’ to life. 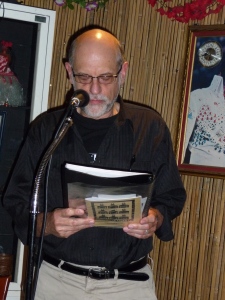 Robert Bos with an ever watchful Elvis in the background

Robert Bos, winner of the 2008 Ipswich Poetry Feast Mentorship prize stepped up to the mic for his debut feature set, the highlight for mine, his poem, Undambi Country.

A huge thank you must be extended to page seventeen magazine for donating copies of their magazine to us for giveaways and of course for offering to publish one lucky Open Mic’er from the June event.

So after listening in to almost forty poems, I decided the only way to pick one poem was to think back over the event and see if there was a poem that had stayed with me, a poem that had put its hooks in and left its lines circling my brain. And there was one…

That poem was ‘afternoon commute’ by Jonathon Hadwen. Here’s a few lines …

To read the whole poem you will have to get your hands on a copy of page seventeen magazine when it comes out later this year. And if you have not already submitted a poem or three, then check out their website as submissions close on June 30.

Next month, SpeedPoets fires up with a feature set from 2009 Arts QLD Poet-in-Residence, Hinemoana Baker (New Zealand) and much, much more … Stay tuned!