Got some exciting news today that a second haiku has been published in translation (in Chinese) at NeverEnding Story, by poet, publisher and translator, Chen-ou Liu. To know that this poem will be read in more than one language is a great honour. Here is a link to read the poem and the translations (yes, there are two).

And as you may know, it is a tradition of mine that with every haiku published, I compose a new one to celebrate. This one is fresh from rolling around my head … 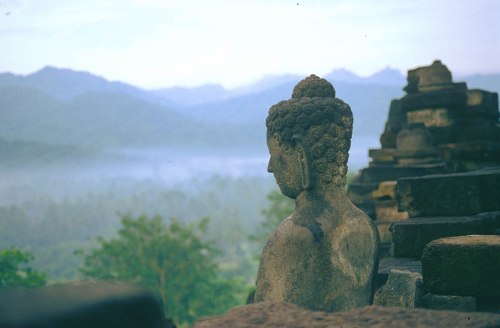 stone buddha
the thought of myself
at peace

This morning, while thousands pounded the pathways of the City Botanic Gardens as part of the Brisbane Marathon, eight of us walked, sat and opened our minds to the lush green landscape, the chorus of birds, the emptiness of sky. This was the third in the QPF ginko series, and while it was officially the ‘winter ginko’, the sun had a sneaky bite to it. I will be posting a handful of poems from the eight poets who joined me this week, but for now, here’s a handful of poems I collected today.

winter sun
the ball in
the collie’s eyes

shooing the ibis
she lets the toddler
cry

V of gulls
in love with the shape
of the river

crows
in the bamboo grove
the wind rattles on

its naked endlessness
blood and wonder

two cheeks of light
so beautiful

a passing bee
loses itself in

the unkinking
scarf of juice

Snow on the Lake reviewed by Patricia Prime

It’s been a little while since I published a review by Patricia Prime, so I was excited to receive this in my inbox today… Discovering a new haiku/haibun collection is always a joy so I hope that this review resonates deeply with many of you.

It is good to find a haibun poet’s efforts in print and Pineola have done a satisfactory piece of work in publishing Glenn G. Coats in this volume.  We are told in the blurb that the book is a “memoir of another time, narratives about being a son, a brother, a friend.” Coats is also the editor of haibun for the online journal Haibun Today.

The book contains four sections. “Baptisms” presents a range of mostly autobiographical poems telling of Coats’ childhood; “Night Brings Peace” deals with personal encounters; “Believers offers reflections on the pleasures of a youthful life spent fishing, swimming and camping, and in “Remains of Myself” the author reflects on life through the eyes and words of his grandsons.  Each section of haibun is divided by three pages of haiku, each containing four haiku and illustrated with a small drawing of a bird. These haiku complement the haibun. I quote one haiku from each section:

distant moon
one shirt holds the scent
of another home

late winter
I shake father’s watch
back to life

end of summer
rain pools
on a flip-flop

ripe strawberries
my grandson wonders
if I am old

Coats is always perceptive and often witty, and he writes with restraint and great care in his use and juxtaposition of prose and haiku in this book. More importantly, he is able to introduce an unusual perspective or unexpected viewpoint that amuses, compels thought, gives new insight, or occasionally startles or disturbs.

From the first haibun, “The House in Lawrence Street”, Coats has us eating out of his hand, wanting to read on, wondering why the child “can’t stand still, climbs up on everything in the house.” We don’t learn why the girl acts the way she does – it could be polio, but he asks why, then, is she able to “fly like a bird or jump like Tarzan.” In the lengthy haibun, “Baptisms”, he is perhaps laughing at himself remembering his cousin Jack as a child:

I see him the night before trout season opens. We are up all night talking; picking through my father’s ashtrays for butts long enough to smoke. In the morning Jack puts on a new fishing hat, and his boots and creel are also new.

But, later we see Jack as a man after he returns from the war in Vietnam:

I see me not much later reading Jack’s one letter from Vietnam, the one where he tells the truth, the horror, and the pain of it, but I am to promise to tell no one. He survives the war only to crash a motorcycle back in the states and for a time he is sucking food through a straw.

We don’t know whom to pity more, author or Jack. The simplicity of the narrative deceives. The spotlight Coats turns on himself and his cousin both amusing and poignant.

The haiku in this section are deceptively simple:

honk of a goose
no answer
to the loneliness

snow bound –
keeping the sock with a hole
one more day

If there is something cool about the descriptions in the first section, those in the second are warmer, yet there is an undercurrent of boldness.  Coats sometimes throws his spotlight on the bizarre or unusual – the “evil eye” of Father Henry in “Beginners”, after he catches Coats and his young friend smoking cigars; or about the poet’s thought processes when he is recovering from a car accident (“Deer in the Headlights”) or the scene where three generations are on a fishing boat in “Harbor Lights”:

My son’s legs begin to wobble. We send him into the cabin for a Coke, but he doesn’t return. An old salt curses through the door, says some kid heaved near the kitchen. We lead him back on deck where he falls like a coat on a bench.

Coats’ imagery is highly visual; we could wish he would engage the other senses more often and directly, but we are glad of his use of dark and cold in the second section’s first haibun “In the Hours Before School”:

We fall down the road like raindrops from a tall tree. It is dark, no lights yet in the houses. Bicycles whir down the hills and fishing poles point like antennas from the handlebars. Canvas creels flap against our sides, Thick hip boots tug at waists. Fingers are numb from the cold.

In this section, there is some concession to other senses, notably in “Night Brings Peace”:

The year that I had wood shop, I made a broom holder out of poplar and a book shelf. The wood was green in color; easy to cut and sand.

It is no coincidence that throughout this section we feel closer to the poet, as he takes us through his youthful pranks, as in “Three Speeds on the Column”:

It is Saturday night and the band at Turntable is warming up. A few of us linger on the sidewalk. Our conversations are muffled and hard to understand as if we are talking underwater.

The haiku here are more considered with the poet’s personal stories:

crunch of gravel –
in one of his last breaths
my name

moonlit cove
my son walks a lure
across water

Description again comes to the fore in the third section. There is clever, controlled writing about his youthful adventures: shooting with bow and arrows or a shotgun, a neighbour’s boy who “never comes out”, a man strumming his guitar, a bullying teacher. In “Believers”, his father attends Mass under duress:

By the end of Mass, he is ready to bolt. Mother and I have to hold him back, make him wait as one aisle after another exits in turn. Outside, in the cool spring air, my father gives Father Henry a big smile and a handshake. “Thanks for a fine sermon,” he says. “How about those Phillies?”

The haiku which follow this section are primarily concerned with nature and human nature:

spring pastures
the farmer calls each cow
by name

It is in the final section that Coats comes closest to engaging our emotions. In the first haibun, “Dove Season”, after describing four boys painting a bicycle with cans of spray, he later discovers that the stolen bike belongs to him and the police are called:

The police know the boys and say they are always getting in trouble. Nothing they can do about the bike. Mama doesn’t keep a record of the serial number and the policemen say it is our word against theirs. No proof.

In these poems there are glimpses of childhood, youth and personal growth in which Coats opens the door a little of his own feelings. In “A Safe Distance From Home”, after describing purchasing a dog from the animal shelter, he writes:

A few hours later, after her first bath, her first walk around the yard, Angel slips away while I am talking on the phone. We call into the woods for an hour, a name the dog doesn’t recognize. Angel returns at dusk covered with mud and briars,

The dog has been ill-treated by a previous owner and Coates is speaking not only of his own feelings, but those of his grandson when, after the passage of a few weeks and “Angel has become Millie”, as

Conlyn lays his stick down beside the path. “I don’t need this stick anymore,” he says as he stoops down to pat Millie on the head.

In “The Snap of a Line”, after describing how his grandfather “bends over the bow”, he writes, “My father drifts in an aluminum boat across  man-made lakes”, while his son “waits for the high waters of spring to settle down then crosses islands on the river to where catfish are breaking the surface in the dark.” Coats is speaking of a family event that has moved him greatly. The restraint of expression in this haibun is eloquent of one who knows the limitations of language to tell such things:

Coats has developed as an interesting haibun poet. His craftsmanship is impressive: language honed to be the instrument of intellect, wit and observation.  Occasionally he lets us into that closely guarded inner sanctuary, as much by implication as by direct words.

You were thrown from a bridge
left to drown
in what remains of the drought-
stricken river.

Today I find your body
caked in mud
unaware of the violent days ahead:

the tens
hundreds, no thousands of beatings
that reduce
everything we know to sand.

[This is another poem I wrote during my weekend in Blackall… it is a hard land, and the people working it are currently doing it very tough. These are the words I found to try and tell a little of their story.]

Tomorrow, I will be will be trekking around the gorgeous Boondall Wetlands with ten other haiku enthusiasts on our autumn ginko.

If the weather stays like it is today – early 20’s and endless blue – it is going to be beautiful to be near the water in a haiku state of mind. Here’s one that I have been rolling around in my head this morning…

zen garden
a wasp flies out
of Buddha’s nose

no longer blue
in this blossom-loosening wind
autumn sky

thief, thief
the gulls call
while you rush on breathing