All Tommorrow’s Parties… Crime and the City Solution

Another sleeping behemoth has awoken, to step out onto the ATP stage next weekend… Crime and the City Solution. After a hiatus of two decades, the band are back with a line up that boasts driving force and Crime mainstay Simon Bonney along with members of the legendary 1987 – 1991 line up, Bronwyn Adams and Alexander Hacke as well as newcomer… drummer extraordinaire, Jim White (Dirty Three).

Crime’s incendiary live performances are the stuff of legend; their music skirting the gothic edges of blues and gospel. At times dark, cacophonous and fuzzed out, Bonney’s theatrical voice always cut through to give the band a chilling, melodious sound. Like Godspeed You! Black Emperor, this is a band I never dreamed that I would see live, having been too young to catch the band in their prime.

Excited, doesn’t even begin to describe how I am feeling…

Here they are at their peak, performing The Dolphins and the Sharks (click the pic below).

Well, I am getting match fit for next weekend’s epic feast of music. I will be trekking off to Melbourne to have my ears gloriously melted at All Tomorrow’s Parties: I’ll Be Your Mirror festival, curated by The Drones. This is festival brings together bands that I never dreamed I would see live… bands that have had a profound influence on me as an artist and a human being.

First and foremost, there is Godspeed You! Black Emperor (who I will also get to see next Wednesday night in Brisbane before flying down). This band is a monster… and their latest album, Allelujah! Don’t Bend! Ascend! is up there with their finest releases. They make noise that is raw and graceful. Here’s the explosively beautiful, We Drift Like Worried Fire.

More than any other band, they have provided a soundscape to my writing for the past two decades; their sound is for me, like a wave… always building. With each listen, their albums reveal new layers, reach new heights. And the only real way to appreciate the music they make is to stop everything… I am looking forward to stopping the world alongside the thousands of other fans when they reach our shores next week.

Who Listens to the Radio – I’m Stranded

littlej’s comment on my recent post about Brisbane has had The Saints, ‘I’m Stranded’ playing on endless rotation in my head. In 2006, Museum of Brisbane put on an exhibition called ‘Taking it to the Streets’ and as part of that exhibition I was commissioned to write a number of short articles about the Brisbane music scene.

Immediately, the song ‘I’m Stranded’ demanded to be written about. Here’s what I came up with… 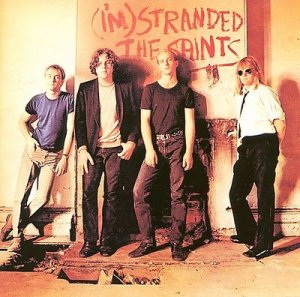 ‘I’m Stranded’ by The Saints

Hearing ‘I’m Stranded’ for the first time in the mid-80’s, almost ten years after its inception, was life changing. I didn’t know it was possible to write a song, that could, conceivably, be played on endless rotation, without wearing out its charm. But here it was… A song both rough and sweet with a fuzz pop sound that suffused my synapses. It was a growling masterpiece, lashing out at the stifling control of the Bjelke Petersen Government. For many it was the song that ensured the future of the Brisbane music scene. Chris Bailey could never have known what he was creating when he picked up his battered guitar and hammered out that chiming riff for the very first time, a riff that would reach across the world and plant a seed of discontent. Bailey was uncomfortable with how the world was moving. Political corruption was on every street corner wearing a police uniform, enforcing an anti-youth culture. Turn the clock forward more than a quarter of a century and we have almost come full circle. The politics are conservative, Bailey is prowling the stage with his latest incarnation of The Saints, on the ‘Burning Bush’ tour and ‘I’m Stranded’ has never sounded more potent.

Of course since I wrote that, The Saints have done what many thought would never happen… the original line up reformed and has played two gigs in Brisbane – one at the incredible Pig City concert at University of QLD and the other at the recent All Tommorrows Parties concert convened by Nick Cave and the Bad Seeds. I was lucky enough to see them at Pig City and that night they were in snarling form.

But if anyone needs convincing that the song is a classic… check it out for yourself!
http://www.youtube.com/watch?v=Q-GueNOKolo