As part of the National Year of Reading, I am going to feature the work of a single poet each month in a new section called Pin Ups. Each Friday I will post a poem and part of an ongoing interview with the Pin-Up-Poet of the month. And in keeping with the Pin Up theme, there will also be a weekly photo!

Michelle Dicinoski’s debut collection, Electricity for Beginners, has been sending sparks through the poetry scene since its release mid-2011, so it is my great pleasure to have her as the January Pin Up.

Your debut collection, Electricity for Beginners has been receiving some wonderful reviews. Where did the idea for the title come from?

I liked the idea of a poetry collection having a title that sounded like an instructional book. And the idea of electricity tied into many of the themes I wanted to examine: love and passion, connections to places and people, ideas of generation and generations. It also had a personal significance because my father worked as a linesman for the Electricity Board when I was a child. When I started writing poetry, it occurred to me that he’d worked with live lines, and I was trying to do the same thing, in my way.

(from Electricity for Beginners) 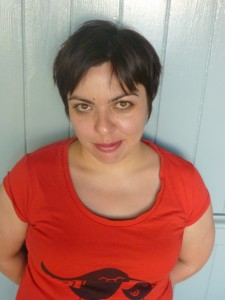 Michelle Dicinoski’s first poetry collection, Electricity for Beginners, was published in 2011 by Clouds of Magellan.  Her poems have appeared in The Best Australian Poems, The Australian Literary Review, Meanjin, and The Weekend Australian, as well as being broadcast on Radio National. Michelle has a PhD in creative writing from the University of Queensland, and was awarded an Australia Council grant to work on her latest project, a work of creative nonfiction. She lives in Brisbane.