Well, it is almost that time of the month again… time for the gathering that is SpeedPoets. So, if you are anywhere in the vicinity of Brisbane this Sunday (October 4), pack up your poems and head on down to The Alibi Room (720 Brunswick St. New Farm), from 2pm. This month features poetry sets from Alan Jefferies and Bruce Dorlova as well as Sheish Money and I stepping out again to play some poems from The Stillest Hour (and some new stuff). As always there will be free zines, plenty of Open Mic and other give aways. To make your poetic tastebuds sparkle, here’s a poem from Alan and Bruce.

Don’t feed the birds
that’s what the letter said
We, the Body Corporate
prohibit you from
feeding the birds.
He didn’t care
he sat all day on the roof
in his dressing gown
a bucket full of bread by his side
the birds seemed to like it
the skinny ones, that is
the fat ones could no longer make it
to his fourth floor balcony window.
While the hallway filled with letters
threatening court action
eviction
a firing squad at dawn.
He didn’t worry
as long as they kept coming
swooping over his head like the spokes
of a giant wheel
showering the suburb with the shit
his neighbours now held him responsible for.

it has become the custom
among our kind to always carry
Water.
this is the age of Aquarians
each polycarbonate amphora
spilling greedy
for want of lack.

i embrace parching
wrap it in thickfurred tongue
close it in creaking voicebox
surrounded by small seas i
drink not.

salt sharpens thirst.
This is the conundrum of oceans

The new music cup is spilling over at the moment, with some very cool releases. Here’s a taste of what’s creating waves in the world of this Lost Shark. 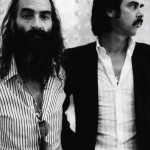 This track is taken from the film The Girls of Phnom Penh and can be found on their new release White Lunar, which collects much of this duos soundtrack work from the last few years. Since the departure of Blixa Bargeld and more recently Mick Harvey from the Bad Seeds, Ellis has become Cave’s main collaborator. This track is stunning in its simplicity.

Do Make Say Think – A Tender History in Rust

Toronto’s Do Make Say Think are set to release their sixth long player Other Truths, and while it may only have four tracks, this is definitely not an EP. Do Make Say Think, create sonic narratives, songs that cast off the compositional anchor and set sail for non-liner waters. Here’s a track from their last album, You, You’re a History in Rust to help you on your way… Other Truths will be released in late October. You can currently listen to a sample here.

Barlow is an indie institution. Whether he be with Dinosaur Jr., Sebadoh, Folk Implosion or in solo mode, his songs have always had a clear-eyed pop sensibility. His new album Goodnight Unknown will be released in early October. For those of you who just can’t get enough Lou, you can watch a documentary of the making of Goodnight Unknown here.

This is the first taste from what is sure to be a wildly dynamic debut album. Shot in New Farm Park in the depths of morning, this showcases Ghostboy with Golden Virtues at their dizzying best. It’s Howling meets Breakfast Club, it’s burlesque meets snyth pop, it’s damn good fun!

My wife has fallen asleep
baring her shoulders to the moon.

I sneak a hand under her hair to fish for dreams.

a child again
the wave
pulls me under

We sit at the edge of the lake
your shadow sewn into mine.
Two swallows ballet across the water
ruffling the stars’ reflections.
They have bought us a night from the south.

for a moment, crickets hum like the sea:
once the sound is gone, only mist remains, or perhaps
a bright moon rising in the east.

narrow path
my wife’s face returning
from the beach

A dinghy, long sunk, resurfaces at low tide
blushing rust and seagrass, pulled back into
rotted-use by a family of gulls.

Well actually, it’s been about five weeks, but whose counting! And again, this Lost Shark is setting sail for southern waters, this time Sydney for a few days r&r, then Terrigal for the 4th annual Pacific Rim Haiku Conference. Things may be sporadic here for the week, so I hope the sun is shining on you in your part of the world, or the rain falling if you need it. Until soon…

morning ritual
gargling in tune
with the crows

Well, The Stillest Hour is now well and truly launched. Last night, Sheish and I shared the stage with Helen Avery and Hinemoana Baker, and for a few tracks, Hinemoana, Sheish and this Lost Shark formed a three-piece with me sitting in on drums. For those of you who were there, you would have seen that playing drums makes me smile…

The coming together of friends, family and the poetry community makes magic. The crowd was a sea of smiles and the energy buoyed us along, each track, topping the one before it. It was one of those rare nights, where all the factors were just right.

I want to finish this post with the words of Hinemoana Baker, who launched our CD. We were (and forever will be) honoured.

It’s a great pleasure to be standing here to introduce and
launch this new taonga, this new treasure, ‘The Stillest
Hour’, by the spokenword supergroup that is Graham Nunn
and Sheish Money, performed by both of them and produced and
recorded by Sheish.

There’s an enormous amount of respect between these two,
as artists and as people, and there’s nothing sweeter to
me than the sound, and silence, of two people really
listening to each other. Both the music and the words on
this make as much room for jamming as for planning, for the
wildly unexpected as for the softly nostalgic.

So I don’t use the musical comparison lightly – I say
‘supergroup’ both because these two are superb acts in
their own right who also bless us by sharing the stage, and
because to me, rather than being a poet and a musician
standing before you, these two are more like a band, where
the lead singer happens to speak rather than sing. There’s
that kind of listening going on through the whole thing,
there’s that kind of rhythm, melody, dynamic, low and
loud, hard and soft – in the meanings of the words as much
as in the sounds Sheish makes. It’s a rare and wonderful
combination – Graham is a poet AND a musician, Sheish is a
musician AND a poet, so there’s a mutual co-creation,
every show is a unique opus with two composers.

And what’s even better is that this show (ie the CD)
and the one you’re about to see aren’t the same.
And never shall be forever and ever amen – and
that’s the beauty of what these two create. Tonight, when
you watch this performance and then buy the album you’re
getting way more bang for your buck.

What you’re about to see is a glimpse of something
that’s still very much alive, still responding to the
organic nature of what it is that we do and continue to do
as artists and engineers and audiences: which is to make,
and to love the making.

Another Lost Shark
Create a free website or blog at WordPress.com.