Where do the Words Come From #5 – Paul Squires

I was recently shuffling some papers from one pile to another and came across the quote – ‘Inspiration is a word used by people who aren’t really doing anything.’ (Nick Cave)

Paul Squires is never one to stand still, so let’s take a look at where he finds the words… 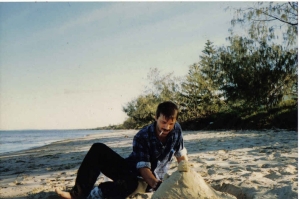 The Pornography of the Self

I have a red rubber nose and bright red fingernails,
a green felt hat and an oversized geranium.
I have a history of Abbie Hoffman,
a box full of astonishing connecticons,
assistance apparent from mysterious sources,
a Chinese Puzzle Box
and several spies with flowerpot eyes but
because you asked so nicely,
(the grass is damp but
i will still sit on it i
have a new book of
haikuschmaiku
written by worldfamous
masters of modern haikuschmaiku
so i will sit
on the damp grass
on my fat arse
and read it.)
I could be waving a polkadot flag and creating revolutions of clownish
mayhem, throwing flour bombs at the smugly complacent and
confabulating the hypocritical but because you asked so nicely I will
just sit here on this damp grass staring blankly into a mute mirror
and practise the pornography of the self.

“Revolution is not something fixed in ideology, nor is it something
fashioned to a particular decade. It is a perpetual process embedded
in the human spirit.” Abbie Hoffman.

All art is improvised, you can fiddle with the aftereffects, but you
cant escape the influence of Jackson Pollock. You can cut and paste
and blur and hide behind and elucidate all you like afterwards but in
the act of creation, all art is improvised, like life, and all art is
in some way performance art. These are common and self evident truths,
and in the past I would put punctuation round them and place them
gently in the mouth of some unnamed character like a cigarette and
then reiterate with an image after rotating on a pivot from a
smokescreen to a mirror and then rewrite for rhythm, look for a
confluence, knit around it, make a poem in other words like a craftsman whilst pretending to be a magician, or vice versa, but now it seems so reductionist, an entertainment rather than a revelation, i am my own dog i used to say, perhaps i’ll buy a puppy,

got a rolls royce

‘cos its good for my voice,
anyone can write maudlin introspection
looking into a goddamn mirror, sir ian, he said
clattering up from his chair and tossing
kings and pawns and chequered boards across the room,
play that Amsterdam Song again
the one in which squalls approached and not a man objected,
slamming his drink down on the piano in F.
and leaning in smelling of salt fish, absynthe
and the last trace of some Egyptian cigarette,
so close his whiskers brushed my cheek and whispering,
have you seen the piano player, my dear,
his gift was only in his hands,
as he closed the diamond clasp around my throat
leaned back and smiled
or has he disappeared,

to him, Terry, mate, you are supposed to be creating a fucking
revolution not whispering in the halls of academia. Fuck’s sake, man,
get a grip, haha, said F. placing his frothy glass immaculately on the
centre of your belly where despite the many tides and storms stays
immaculately upright, though tilting, it’s good to be home,
Haha, I am back, my love, I have a gift, he says, leaning down and
kissing your nipple like tasting a strawberry, a new tattoo, it’s a
crouching tigger hidden dragon tattoo, schimply schplendiferous
looking down at you,

The True Legend of Paul Squires.

(Wikipedia Page, first draft, freehand doodlings of sunonhead after
falling asleep in the sun on Sunday Morning.)
The only known photograph of Paul Squires was taken decades ago. He is
sitting on the beach behind his house at the time making a sandcastle
with something long and white hanging out of his mouth. At high tide
it was possible to throw a line from his back verandah into Moreton
Bay. He only ever caught one fish, impaling a squiggling prawn on a
laser sharp hook and throwing it into the bay then feeling the warmth
of the fire and staring blankly out into a vast smooth ocean
reflecting an infinity of stars. There is Orion, the hunter when
Whack! a flathead grabbed the prawn as it tumbled into the channel and
ripped off into the depths. The fish is wriggling and squiggling under
his hand and a sharp knife flashes in the other and the rhythm of the
fish slows and there is a silence. This photograph was taken that
afternoon.

When drunk Squires is known to have claimed the most outrageous things are true, that it is possible to contain actual magic in language but
his definition of actual magic changes with his mood. He claims such
ironic absurdistries as having used the internet to have achieved a
kind of immortality, sometimes through the blatancy of not deleting
anything and sometimes by having transcended the human, since it is a
fundamental aspect of being human to know that you are going to die.
He is waiting patiently to feel that he has earned the respect of his
peers so that he can stop trying so hard, the genre settles around his
shoulders and it requires a mightier shrug as he gets older and the
concretions of age, scars, barnacles. The fact is he no longer wishes
to be reborn, to be better, he only desires the freedom to be what he
is.

Filed under Where do the Words Come From?

Tagged as Another Lost Shark, gingatao, Graham Nunn, Paul Squires, recurring themes, the writing process, themes for writing, voice in writing poetry, Where do the Words Come From?